Lava rock has many uses in an organic gardening. Its use can impact how plants grow, and the amount of work a gardener has to put in.

Lava rock is a form of igneous rock called scoria that is created by the eruption of volcanoes. Scoria is formed when the molten lava spewed from a volcano solidifies with air in bubbles still trapped inside. This makes scoria or lava rock lighter and is the reason for bubbled shaped holes in the rock. Lava rock can be brownish red, black, or grey.

Being natural in origin, it is suitable for use in organic gardens as mulch and for landscaping, and does not have any environmental impact like artificial mulches do. It can be purchased at most home and garden stores.

Gardening expert Lisa Hallett Taylor describes herself as "an environmentally conscious landscape designer" and has insight into lava rock use. Hallett Taylor is no stranger to mulches, as she is a published author and expert who specializes in landscaping, home and garden, antiques and collectibles. She's written for the Los Angeles Times, contributes to Houzz and Laguna Beach Magazine, and other respected publications.

"Lava rock is excellent as a mulch because it lasts a long time," Hallett Taylor said, adding, " It doesn't break down--like bark."

Other Properties of Lava Rock 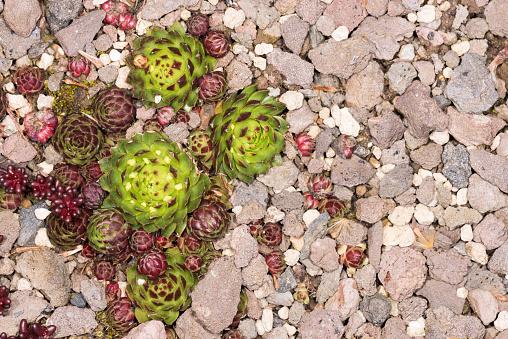 Lava rock is an inorganic mulch since it comes from the earth, but like any other kind of organic mulch, lava rocks helps keep water in the soil and keep weed growth down.

However, lava rock absorbs heat during the day, and releases it at night, thereby increasing water loss. Plants that do not like these conditions should not be used with lava rock explains North Caroline Cooperative Extension Service (NCCES pg. 16). Since their coarse size provides good drainage, lava rock is also suitable for plants that do not like waterlogging, like succulents, and for low-lying areas.

Instead of using only lava rocks or any other mulch all over the garden, combine different materials. A thorough knowledge of the garden, and movement of shade during different times of the year and day should be kept in mind while planning the use of mulch to make best use of its properties. Use of lava rocks is not complicated.

Lava rock has its share of disadvantages that gardeners should keep in mind. These are:

Lava rock's unique qualities should be kept in mind while deciding where to use it in a garden. 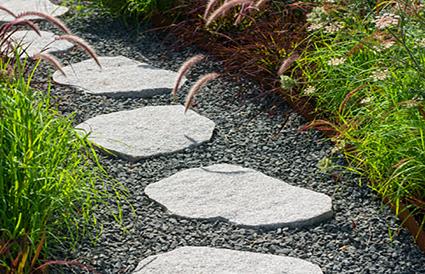 Hallett Taylor recommends black lava rock saying, "I love the look of black lava rock with succulents, cacti, and native plants in drought tolerant and desert landscape design--especially when different sized rocks are used." She added, "The texture is beautiful and with some of the rocks you can tuck succulents into crevices with some tightly packed soil for an interesting effect."

Some other mulching suggestions are:

Lisa Hallett Taylor suggests people take advantage of the different hues of the lava rock within their landscaping design.

Method for Landscaping Use

To use lava rock in landscaping, follow these basic steps for success:

The benefits of using lava rock as landscape material is essentially the same as its use as mulch. In addition, landscaping lava rocks:

There are some disadvantages to using lava rock for landscaping. These are:

The color of lava rock used for landscaping needs to be chosen with care, cautions Hallett Taylor. "When using it, also consider the architectural style of your house and the landscape design style," she said.

Drawing upon her many years of experience, Hallett Taylor, suggests:

As a general rule Taylor prefers black to red lava rocks. Red lava rock is considered a disadvantage if a property is to be sold as the color stands out.

Many people are replacing expanses of water guzzling lawns with xeriscapes covered with mulch. Lava rock is ideal as it does not need to be replaced often. It is can be part of intelligent landscaping that is gaining popularity in response to modern concerns about sustainability or environment friendly lifestyle, especially in regions where drought is common. Even though the initial investment is more than for organic material, it can save water as well as money and time on the long run.

Other Uses In Landscapes

Being light and coming in different sizes lava rocks lends itself to imaginative use in the garden either in large or small quantities. Lava rock has many applications in landscaping, such as:

This irregular shaped rock with pointed edges is a great choice as an organic, chemical-free slug control because the nasty bugs cut their bodies up on the rocks and therefore can not bother plants. To be effective spread lava rock beyond the plant canopy and removing dead leaves or grass that could act as bridges for slugs. However, useful insects and worms can also be affected by lava rock.

To control slugs in the kitchen garden where vegetables are grown or in flower beds with annuals, a border of lava rock on the periphery of the bed can keep slugs from entering the bed and getting near plants. When using lava rock as slug control, Hallett Taylor reminds that this can be useful only in areas covered by lava rocks. It maybe necessary to try other methods of slug control in parts of the garden without lava rock.

Making the Right Choice for a Garden

As with many choices when it comes to gardening, deciding what kind of mulch to use is a personal decision. It is also based on the location of the garden, and plants that will be grown. An organic option like lava rock is a great one to consider.

0
Comments
© 2006-2020 LoveToKnow, Corp., except where otherwise noted. All Rights Reserved.
Resources, Advice & Tips for Covid-19
Read More
What Is the Importance of Lava Rock in Organic Gardening?