Prices for the organic hay market fluctuate and are influenced by factors, such as grass species, weather, region, and market demand. When purchasing organic hay, buyers want clean hay at good competitive rates. Other things to consider when pricing organic hay are weight, density and bale size.

Hay prices fluctuate from day to day. The average cost of organic hay cost per bale can range from around $4 to $5 per bale, depending on the quality, type of hay, delivery, freight, and storage charges, etc. As an example, the price per ton for organic alfalfa that is FOB (free on board at place of origin) without any delivery or other fees is priced by quality. An example of pricing as of September 2019 includes:

Keep in mind that many factors go into pricing organic hay, and markets do fluctuate, so you should always look for current prices.

There are several ways you can find organic hay prices. There are government and non-government websites that track these prices. The cost for organic hay can differ from one region to another as well as from one grower to another. The price differences often reflect the quality of hay, weather, regional demand, and other factors. 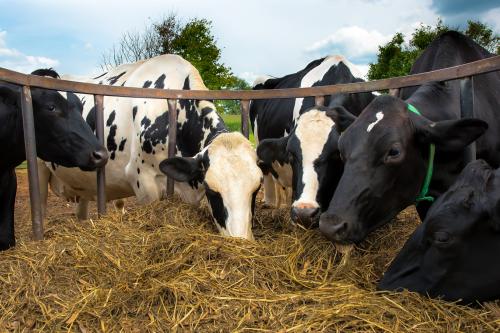 You can find some organic hay prices by visiting the USDA (United States Department of Agriculture) website section on market news that includes the National Weekly Organic Summary. You can scroll down to find the Grower FOB (Free On Board) Farm Gate Organic Hay for Spot Transaction. For example, you can find four qualities of Alfalfa and the cost per ton. Comparisons are usually given for the previous week and some reports also give trade comparisons for the same week of the previous year. A few examples of reports you can find on regions and individual sates include:

Hay Map offers a page for organic hay growers to list their hay for sale and is organized by state. You can click on a listing for more information that includes photos, cost per bale, number of bales available, size, weight, type of forage, location, and if delivery is available, the cost per mile is given.

The University of Minnesota Extension developed the Hay Price Calculator App that sells foraround $.99. You can use the app to calculate hay pricing by the ton. The app also features a price comparison of three bale sizes that includes small square, large round, and large square.

Organic Hay Prices Through Other Resources

There are some websites that serve as gateways for buyers and sellers of organic hay. These sites provide information about the hay being sold. Some state agriculture departments also offer this type listing of growers. In addition to these services, many organic hay growers and farmers feature their forages for sale on farmer cooperatives and their farm websites.

One of the determining factors in organic hay prices is the type of grass. According to Albright's Mill, the most popular hay grasses are alfalfa, fescue, clover, timothy, and brome. Some forages include legumes for added nutritional requirements. The type of hay you buy is determined by the type of livestock you have.

Spencer Berry of SB Hay and Feed explains the different types of hay required by cows in his online guide for selling and buying hay. Spencer explains, you don't purchase the same hay for beef cattle, lactating cows, dairy cows, and young calves. Each has different nutritional and coarse vs soft hay requirements.

Buying Organic Hay Based on Weight

The pricing for organic hay (and non-organic hay) is calculated by bale weight. This is determined by the bales size and density. 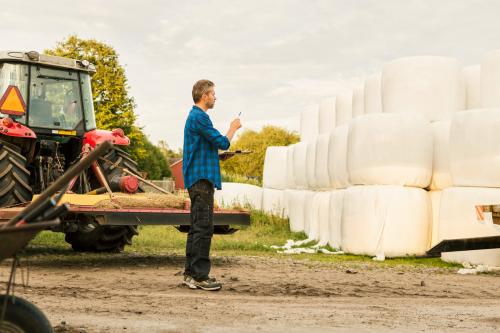 Stable Management explains the weight differences in bale sizes, such as small square bales that can weigh around 50 lbs up to 100 lbs. Round bales weigh on average around 2,000 pounds (1 ton). The weights of square bales are typically accurate. However, the weights given for round bales aren't always precise.

Improper Bale Weights for Round Bales

According to the University of Wisconsin-Extension many sellers and buyers of round hay bales guestimate the weight. The Extension conducted a study on the practice of eyeballing round bales of hay vs weighing round bales and concluded, "Typically, buyers underestimate bale weights, while sellers overestimate." This practice means buyers will typically pay more for less hay.

The bale size is one more thing to consider when pricing organic hay. According to AgriLife Extension of Texas A&M System, round hay bales come in various widths for 3', 4' and 5' diameters. The widths can be either 3', 4', 5' or 6'.

Bale density is determined by how tight or loose the bale is wrapped. The bale compression isn't consistent throughout the market since the wrap tightness is determined by the type of baler and operator-controlled baler settings.

Another factor you want to consider in pricing organic hay bale density is the type of forage species and whether the forage was immature or mature when harvested. Bales harvested from the same field by the same baler/operator should be consistent in density and weight.

When beef cattle ranchers and dairy farmers transition to certified organic status, the demand for organic hay increases. The Hay Manager advises it's a good time to become an organic hay grower.