Indoor Gardening the Organic Way by Julie Bawden-Davis is an excellent book for anyone who enjoys houseplants or is considering adding a few houseplants to their home's décor. More than just a guide to care for your indoor plants, this book helps readers with plant selection, soil selection and placement in your home, repotting and pest control-all organically!

Julie Bawden-Davis has written two books on houseplants, one on flower gardening as well as a book on growing strawberries. She is also the author of countless gardening articles that have been published in The Los Angeles Times, The San Francisco Chronicle, Ladies Home Journal and many other publications.

Recently, Bawden-Davis took time out of her busy schedule to do an interview for readers of LTK Organic about her book and organic gardening in general.

LovetoKnow: How long have you been gardening indoors organically?

Julie Bawden-Davis: I began organic gardening back in the late 1980s when the movement was just beginning to pick up steam. At the time there was still a lot of skepticism surrounding the whole idea, and it was considered odd to some old-school gardeners.

Of course, now it's generally widely accepted as the preferred method of gardening for home gardeners, and it's also becoming much more common commercially.

LtK: Why do you feel it is important to garden organically?

JBD: Gardening organically is important on many levels. In general, it is a much gentler, kinder way to garden. It leads to healthier plants and crops, which in turn is healthier for the gardener, wildlife, the soil and our ozone layer. Plants absorb volatile organic compounds from the air and thrive on them.

LtK: What motivated you to write this book?

JBD: When I began writing my houseplant column, The Gardener Within in 1997, gardening organically outdoors had become the norm, but whenever I asked horticultural "experts" about gardening indoors organically, I always got a resounding: "No! You wouldn't want to do that sort of thing indoors."

They would suggest leaving organic gardening to the outdoors, which puzzled me. Why could we live a healthy, non-toxic lifestyle and not do the same for our houseplants? How could it be OK to eat organic produce and clean our indoor air while polluting our poor houseplants with toxic, synthetic, chemical fertilizers and pesticides?

For health reasons, I began experimenting with organic gardening indoors. What soon astounded me was how well my plants responded to a natural diet and less invasive pesticide treatments. Plants that never fruited or flowered before began doing so, and I got multiple compliments on my indoor garden.

Over the next few years I continued to garden organically with great results. It soon became apparent that a book on the subject would be useful, since there was, and still is, nothing else about gardening organically indoors.

When I finished my third book, Reader's Digest Flowering in 2003, I began work on Indoor Gardening the Organic Way. It took me several years to sell the concept, which was a little frustrating, but I believed in it and kept working at it. At one point I found an agent who also believed in the concept and she eventually sold the book, which came out this year [2007].

It turns out that it was best that the book took a few years to come to fruition, because the timing has been perfect with the Green Movement. People are much more receptive to the idea now than they would have been even a year or two ago.

LtK: What plants do you recommend for beginners or those with a "black thumb"? 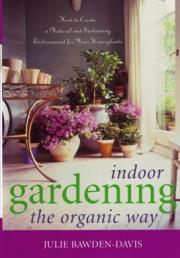 JBD: My top five picks are:

LtK: How do You convert a chemically raised plant to organic?

JBD: You can easily "detox" a plant that has been grown commercially and convert it to a natural diet. The best way is to repot them in organic soil, or at the very least, leach them.

Commercially grown houseplants are also grown with the use of synthetic steroids applied to your plants in the form of growth hormones. Liquid seaweed or kelp is a natural growth stimulant and should be sprayed on the leaves to prevent shock. Products containing seaweed are a natural, organic form of the cytokinins found in synthetic growth hormones. Such fertilizers will also give your plants necessary nutrients.

The great thing about organics is that they are so gentle and gradual themselves that you don't need to worry about hurting your houseplants by using them. The quicker you can detox a plant, the faster it will recover and start growing well for you.

LtK: How time and labor intensive is organic vs. conventional methods?

JBD: Many indoor gardeners are surprised to learn that it is less labor intensive to garden organically. By feeding the soil a gourmet organic feast, you not only feed the plant, but also create a soil that can literally feed itself. Harsh, synthetic, chemical fertilizers don't feed the soil. Instead they sterilize the soil so that your plant needs a "fix" every week or so.

Organics are slow release and feed the soil, creating a healthy home for your houseplant roots (See chapter two for more information). I don't fertilize that often-generally anywhere from every two to six months, depending on the plant.

By using methods such as mulching, which helps the soil, you also cut down on watering by about 50 percent. I have plants I only have to water every two or three weeks-thanks to mulch.

LtK: What is your preferred mulch?

JBD: I tend to gravitate toward shredded bark. It will depend on the area of the country you are in as to what you'll find available in bark. I like the shredded better than the chips because it tends to bind some, creating a protective layer-but chips also work. I think bark also looks nice.

Mosses also work well in some cases, but you have to watch that the soil breathes under them.

LtK: What about vermicomposting?

JBD: Indoor gardeners don't have to vermicompost if they don't have the space or stomach for it, but I highly suggest they use vermicompost (worm castings) in their potting mix or use soil that has it added.

Castings are a key component in soil that is alive and healthy. You can get vermicompost from many nurseries nowadays, or on the Internet, and it is virtually odorless.

For the adventurous indoor gardener, vermicomposting is actually not messy at all-and you can do so in a small area (see pages 19 through 21 for more information). Depending on your area of the country, you can keep the worm farm in a shed, porch or garage, or in my case, outdoors.

On page 28 of the book, Bawden-Davis has a recipe for organic potting soil that she was kind enough to share with Organic readers. The basic recipe follows, but for specialty mixes you'll have to read Indoor Gardening the Organic Way on page 29.

You can find these ingredients in your local nursery

Mix well and use for almost any houseplant.

To learn more about organic gardening as well as the books and articles written by Juile Bawden Davis, be sure to check out her websites: Healthy Housplants.com and Julie Bawden Davis.com.